So here’s a home-schooled joke, Phineas and Ferb are actually our Math and Science Teachers 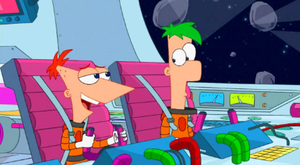 The implication being we’re smart enough to figure out both those things by watching Phineas and Ferb work. Not quite.

But I do think I have one thing in common with Phineas and Ferb, I love to imagine things beyond possible.

Maybe not like them, not now that I got old and realistic and boring. But I still have a very active imagination.

The whole premise of the show could basically being able to do whatever you can imagine doing, every kid’s dream, that you could never get in trouble for it. And you would never get hurt.

What I think really made the show genius though was the combination of blatant mocking and on point subtly.

The show makes fun of everyone. The people on it, the people watching it, the thins we do as a society, the things we used to do. This it does obviously. Almost too on the nose sometimes, you do kind of wince. And roll your eyes.

The subtlety comes in with the characters themselves. Before I watched all the episodes I thought the characters were cut and dried, they were two dimensional, right? (Ha Ha.) 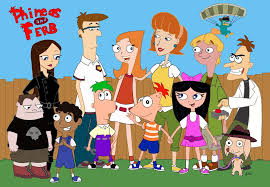 I was wrong. Overtime the writers developed these characters. The beauty of it was the characters are still basically ordinary people. The dull and boring adults, the anger mismanaged bully, the school obsessed nerd. (Me–just kidding.) The older sister who just wants her brothers to be normal. And Phineas and Ferb themselves are just too little boys doing what they love and bringing their friends along for the ride.

Isabella, the girl with a major crush on Phineas is a normal girl too. Vanessa, my personal favorite, is a moody teenager but with a good heart.

And they all are these average things, but the show makes those things out to be special in of themselves. It may be normal for little boys to have bid imaginations and big dreams, but isn’t that also a astounding thing?

Candace is a  tempestuous teenager, but she can also do amazing things when she’s motivated and proves herself to be dependable where it counts.

Buford is a bully, but he changes under the influence of good clean fun with his new friends, who go from being his victims to being his best buddies over the course of the Summer.

Baljeet becomes less wimpy and more adventurous after hanging out with the others.

Isabella is very girly, but it doesn’t make her any less cool. She does incredible things just like the boys, but owns being a girl the whole time. Unashamedly wearing pink jumpers, hair bows, and going for sparkles and butterflies and hearts.

Vanessa is shown to be able to do any number of cool things, and despite being the moody one, proves to be the most emotionally intelligent person on the show. (Possibly one of the most intelligent period.) and though she seems to have a dark side, int he end she convinces her dad to be a good guy.

My favorite thing about Phineas and Ferb is how they nail touching moments, even while being silly and nonsensical, simply because they themselves are good people, not perfect, but good. Guys you’d want to be friends with.

I also, as a writer and actor, have to appreciate that Jeff and Swampy (the writers) got to let their imaginations go, make fun of everyone, reference all their favorite science fiction/adventure shows and movies, and write songs about stuff no one else thinks is worth singing about in all genres of the spectrum…and get paid for it for 8 years! Then asked to come back for another show.

Unlike other Disney channel and kids’ network show characters, who constantly disappoint you with making stupid, cruel, or irresponsible decisions. Phineas and Ferb tend to come through for people on the moral crisises, and do it in a fun way.

Sure, it runs a little too far off the deep end sometimes. Sometimes the mockery is too much. But nobody is perfect.

What I think matters is that this show gives you ideas and sparks creativity. And in its own toned down way, it makes me feel more kindly toward the people around me by reminding me that even when they are ordinary, they can be extraordinary.

Which may sound like sap, but it’s really true when you think about it. People around you tend to surprise you.

My dad likes to harp on how millennials are stupid and flaky, then he is surprise a lot when he finds one who isn’t.

If you were convinced all young people were brilliant, as some people are, I’m afraid you need to meet some of the ones I know…sorry, we’re not all brilliant. I am, but not all of us. (wink.)

But as Phineas and Ferb shows us, even in stupid people there are flashes of brilliance. Or there may be hidden genius no one ever taught them to use. And int he smartest people there can be total cluelessness. And in humble people just there to help, the truest character can be found. (Isabella being my example here.)

I read a book expounding on how the Peanuts could be telling us the message of the Gospel. Phineas and Ferb is very similar to a newer, animated version oft he Peanuts, with less pessimism from the main characters. While I won’t make the claim that Phineas and Ferb was in any way a Christian show, I will say that it had some solid values and I definitely hope to share it with my kids some day. 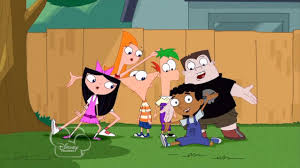 That’s all for now, until next time–Natasha.

[All photos are from Google and I am in no way claiming them to be my own or using them for monetary gain.]