Some of you older followers know me and how I get with show characters. I just can’t help myself, I have to delve into them. A year or two ago I did a post about characters from Ever After High and what I learned form them, I thought it might be fun to do the same thing with RWBY. Even if you don’t watch it (and I recommend it but do not read the comment section.) The show is rife with interesting life lessons.

Now, though I like most of the characters, I don’t get as much out of all of them. The thing that makes RWBY different form Ever After High (there are similar stylistic choices) is that Ever After High was very much character driven, the character’s individual perspectives were the main source of conflict. Which was great, and I have no complaints about shows like that. But RWBY is a different kind of show. It’s story-plot driven. The characters become more clear with plot development. Which means you love them more the longer you watch.

A lot of the lessons aren’t really spoken so much as implied. One would be the importance of forgiveness. Over seasons 4 and 5 especially, Yang, one of the main four, deals with bitterness toward her mom as well as her teammate Blake for abandoning her, in the end she realizes she needs to forgive Blake, and at least come to terms with how her mom is. At no point does anyone directly tell her to do this, but her sister and her friend both say different things that change her perspective, plus she learns a lot on her own.

That’s as good a theme as any to start with. The point of Yang’s arc, and Blake’s in some ways, is that forgiveness is not something people deserve, and it’s not something they can earn. Some fans have complained that Blake was forgiven way too easily, but they miss the whole point. You can never deserve forgiveness, so either it is given, or it isn’t. Yang could have waited, but it wouldn’t have changed what happened, it would have only dragged it out. I’m glad she saw that.

Blake has a hard time forgiving herself. I related to her a lot in season 4 when she talked about being tired of people getting hurt because of her. Girls especially tend to feel this way, though I’m sure boys can too, but that feeling that we bring more trouble than we’re worth. Blake’s checkered past of working with a terrorist cult (Before realizing what she was in) makes her pretty insecure about whether or not she’s really able to help people.It seems like she gets them hurt more than she saves them. There’s a very cool song “Like Morning Follows Night” that’s between her and Sun, her boy friend that illustrates what she feels and what his response is is that it hurts people more to be pushed away than it does to risk themselves for her. Blake slowly starts letting herself get helped.

Then there’s Weiss, another member of the main team. Her story is more complex than most of theirs. She is out of place in her family. As cliche as that sounds, believe me if you watch it, it’s real. I felt uncomfortable around her family as a viewer, something about them was creepy. Both Weiss and her older sister realized they needed to get away from their parents, their father especially. I normally find that story line annoying, because it’s just not justified, but in this case their dad really is evil and I can’t blame them at all. Aside from that theme, there’s an interesting side theme that children aren’t guilty for what their parents have done and shouldn’t be made to pay for it. Plus a good old crack at how the rich and indolent can live such empty lives. Which is well worn, but in this case fits.

Ruby, the team leader, was not my favorite. I liked her but she’s more young and quirky than I tend to favor. Over time I came to appreciate her though, she gives her teammates and friends some great advice. Telling Jaune, another team leader, that he’s not allowed to be a failure now that he has  a team to lead. It’s an important moment because everyone, even the fans, thinks he’s already failing and that’s kind of hard to help without him getting a serious upgrade. But Ruby turned it around to show that leadership can be entrusted to us whether we like it or not, and yet it’s still our responsibility to be the best we can.  Ruby inspires that in all the other characters.

And then there’s the other main team, JNPR (pronounced “juniper”) Aiiiy. SPOILERS! 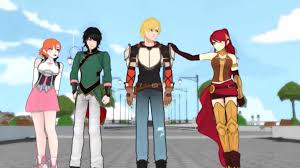 Seriously, I don’t know if I can bring myself to talk about it just yet. Suffice it to say they have some of the most emotionally wrecking arcs of the show.

But before and after and during that they have some of the best development.

All of them are introduced as a little quirky and unusual, and Jaune the leader, is shown to not be a very good fighter. Yet over time we see what makes them exceptional.

Jaune, though he lacks confidence, proves to be fiercely loyal to his friends and devoted to his team. Though he gets bullied and has issues with admitting he needs help, he eventually stands o]up to the bully for the sake of his team and then learns to accept help. He expresses his frustration at always feeling like the damsel in distress. Even as of season 5 he’s still the weakest fighter, but that isn’t really the point. There’s more to strength than being powerful, and there’s more to being a hero than strength. In fact what Jaune’s teammate Pyrrha shows him is that being a hero to someone is a lot more about believing in them and being there when they need help then it is about being able to kick rear. Thought that’s always fun to watch.

Ah Pyrrha, my favorite. I just love her, I can’t help it. No one can, I’ve yet to read a bad word about her.

Pyrrha was from the start easily the kindest character on the show. She and Jaune are alike in that they see someone in need and the aren’t shy about helping them. Pyrrha usually makes it look way cooler, but hey, if you can, why not?

Pyrrha’s theme ended up being about love. Something that I pinned down about her early on was that love wasn’t just something she did, it was who she was. Pyrrha is never seen doing anything mean or selfish. She inspires without trying to. Really you have to see it to understand, but you can’t watch any scene with her in it without thinking “Wow, she’s just so…nice, but like, she means it. How does she do that?”

Nora and Ren are the last two members of the team, and they’re a package deal. They balance each other out. Nora is peppy and a little crazy, but shows she is emotionally intelligent over time. Giving both Ren and Pyrrha advice that tells us she pays attention to what people are feeling. Ren is the opposite of Nora as far as personality goes and sees uncomfortable with emotions. Which is explained later, his theme ends up being getting closer and not letting anger make you do foolish and reckless things. Facing your demons and so on.

There’s even more, but this is long enough for one post. Until next time–Natasha.