Okay, Thomas Sanders, I admit it, you are a freaking genius.

You may not know it, but it’s buried in there.

I was reading  a book by G. K. Chesterton and I came cross an analogy for eastern philosophy’s view of eternity that arrested my attention, because I hear it used elsewhere.

Ironically, I do not think Thomas Sanders, winner of best YouTube Comedian Shorty award (hope I spelled that right), knew exactly what he stumbled on…or Joan, his friend who helps research and write this stuff.

It’s the snake devouring its own tail picture. I did not know it was a real symbol, but apparently it is. (In occult stuff, as well as Viking culture. Weird.)

I believe, given what I know of odd eastern mysticism, it would mean in that context that eternity flows in and out of itself, it feeds into itself, starting over and over again, regenerating, reincarnating.

Some cultures view time as cyclical, or traveling in a circle, which is why we have repeating patterns.

The biblical view of time is better represented by a wheel that rolls on a line, like the seraphs from Ezekiel’s vision, cycles repeat, but changes and alternations and progress still happen. Time is a vehicle getting us from one place to another. The only way a mortal being could travel without being burned up.

You’ll find the idea in “A Wrinkle in Time,” the 4th dimension is time, which is another way of saying the 3rd dimension is solid objects and the 4th is them moving. The 5th dimension is moving through time, or more accurately, moving time itself. Bending it.

That’s not really relevant to this, except as a concept slightly different from the repetition of the eastern view.  Even they think you reincarnate into better or worse states, as I said in my last post, all religion seems to share the idea of a better or worse end after death. In this case Karma is what decides that.

To be fair, I’m sure there’s nuance depending on whether you’re Hindu, Buddhist, or some other variation of a reincarnation-believing religion that I don’t know about because I live in the West. (Hey, it’s hard to keep track when you don’t live in it.)

But the point is, Thomas Sanders links this odd idea to the idea of losing motivation. He only applies it to creating his videos, but it easily applies to more than that. He actually sort of acknowledges this in other videos about “Why do we get up in the morning?” and “Learning New Things about Ourselves.” Even coming into the more lighthearted “Becoming a Cartoon.” He has a habit of getting existential.

Being the unashamed nerd that I am, I find his philosophy to be the most interesting part of his videos.

If you want to see for yourself, 6:00 minutes in is where the part that really interests me happens. I want to give credit where it’s due.

Patton (Morality) describes the creative process as a whole, mushy vision, and the solution to this is Logic. Yet Chesterton points out that a purely logical way of viewing things only narrows your perspective. The creative process may be unclear, but that mirrors how we see life, not always clear on what is happening, but able to see more because we cannot see all, than by trying to fit all into our logical minds.

That leads to a very dark, bleak, panic as Logic in this video discovers, being the solution to a problem he has caused. And those who try to see the world with reason alone find themselves in that  position, as Chesterton elaborates:

“Their position is quite reasonable; nay, in a sense it is infinitely reasonable, just as a threepenny bit is infinitely circular. But there is such a thing a mean infinity, a base and slavish eternity. It is amusing to notice that many of the moderns, whether skeptics or mystics, have taken as their sign a certain eastern symbol, which is the very symbol of this ultimate nullity. When they wish to represent eternity, they represent it by a serpent with his tail in his mouth. There is a startling sarcasm in the image of that very unsatisfactory meal. The eternity of the material fatalists, the eternity of the eastern pessimists, the eternity of the supercilious theosophists and higher scientists of to-day is, indeed, very well presented by a serpent eating his tail, a degraded animal who destroys himself.” (Orthodoxy, G. K. Chesterton. Pg 47.)

This got me to thinking about the anime I watch. I’ve noted this particular philosophy to be present in it. It’s a common one in anime, and other eastern influenced stuff, it’s also frequently found in the Church. It’s a common idea to men.

That you can, like with a piece of wood, whittle your character down into something beautiful and smooth. 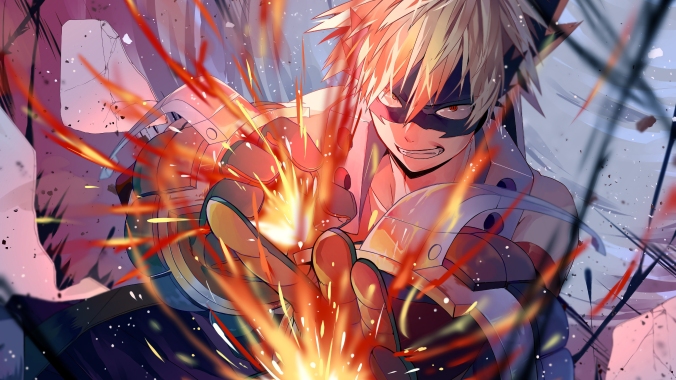 My Hero Academia‘s eastern philosophy of lopping off all the bad habits and tenancies and honing your skills down to the basics. That you have a basically good nature, with potential, but you need to be trimmed, (it is literally expressed almost that exact way in Best Jeanist’s words to Katsuki Bakugo in Season 2.) It’s basically the same thing. And the same as the materialism which Chesterton is referring to, which by the way, he compares to madness.

The idea that materialism shuts out everything but just the material. It’s literally the definition, but the definition is awful, he thinks, because it is so narrow.

It may encompass the whole world in that it is a world view, but it also shuts out much of the world, anything that can’t be measured by matter. Including our emotions.

My Hero Academia is not that extreme. It certainly has a better worldview than materialism. It’s not completely wrong to think we should cut out the bad things of our lives.

The bible teaches that.

But here’s where it deviates, and I may add, where Thomas’s Logic has to cooperate with his Morality, since he is smart enough to know nullity is not the way:

The Bible says not just to remove evil, but to replace it with good. The idea is not to be some enlightened martial arts master, cut off from all negative emotions, inner peace is not the annihilation of troubling feelings, but the overcoming of them with better ones.

Few people can succeed at shutting off their feelings completely, even depression is a feeling, and those who can are only less able to understand them. But it’s far most possible to overcome our emotions by focusing on better things. OF course, we still deal with the bad stuff, but we do not dwell on it.

I could go for a long time about all the fictional examples of this, and even real life ones, but I think I can leave it here.

Good for you Sanders.

And Chesterton is a genius also.