I am taking a Philosophy Critical Thinking Class for the Winter. Which means I have it for three hours a day for three days, 9 hrs a week. For 6 weeks.

It’s been one week, and I’m already so freaking done with this curriculum.

The class itself is fun, I’m in Honors, so the smart people are in this class, the ones who can follow what I’m saying half the time in discussion.

But the textbook–ergh! I’m in chapter one and its already so, so dumb.

Plus, the reading materials we’re given. Is it too much to ask that they not all be leftist, liberal, progressive, and invariably biased.

I know, I know, Public College has to push the liberal agenda, but why not just pick subjects where there’s not as much of a clear bias to have us read about, this is social conditioning, not critical thinking.

(I wonder how many people would go to that class, if they offered it, because they don’t know what Social Conditioning is and think it’s a real subject.–I mean it is, if you’re part of a regime…or the school system.)

On top of that, Philosophy is taught a certain way now that is just ludicrous.

You’ve no doubt hear it before. The Relativistic approach.

I’m supposed to be practicing defining terms for my papers, so I’ll go ahead a define a few here:

Relativism: any theory holding that criteria of judgment are relative, varying with individuals and their environments. (Webster’s.)

Philosophy: the rational investigation of the truths and principles of being, knowledge, or conduct.
the critical study of the basic principles and concepts of a particular branch of knowledge, especially with a view to improving or reconstituting them:the philosophy of science.
a system of principles for guidance in practical affairs.

The Greek words that the word Philosophy comes from are Philo and Soph, that is, Love and Wisdom. Philosophy initially meant the “love of wisdom.”

When you read the older philosophers, like Socrates and Plato, you’ll notice they really enjoyed what they were talking about, they enjoyed seeking the wisest, most right course of action.

In modern times, people are trying to redefine Philosophy to mean its inverse, Not seeking Wisdom, not seeking truth, but treating all ideas as equally valid. Antisophy, if you will.

It should be obvious that Relativism and Philosophy are actually polar opposites. Who can love anything relatively? Certainly not wisdom. Love is passion, not a mediocre feeling of approval.

Yet, in my philosophy class about critical thinking, I am told that certainty in our knowledge is a “potentially dangerous mental bias”, and that the goal of critical thinking is to be relativistic. To commit to the pursuit of knowledge, for its own sake, and not to any one way of looking at truth.

Why the heck I should care about truth, if knowledge is impossible to be certain about, is not explained.

Think about it: If we cannot be certain of knowledge, i. e. Truth, then Truth is not real. Therefore, what is the aim, the end goal, of critical thinking?

To discover that one non-truth is preferable to another non-truth?

As long as I don’t believe in Theism and Right and Wrong, by any chance, the Philosophy Course doesn’t really care to answer that question.

I am not kidding when I say the chart we were given to evaluate our level of critical thinking was intentionally trying to shame religious people be putting the belief in a religion and good and evil as the lowest form of thinking a college student can begin from.

(If you don’t believe me, look up Perry’s Scheme, and see for yourself. Here’s a chart of the basic ideas.) 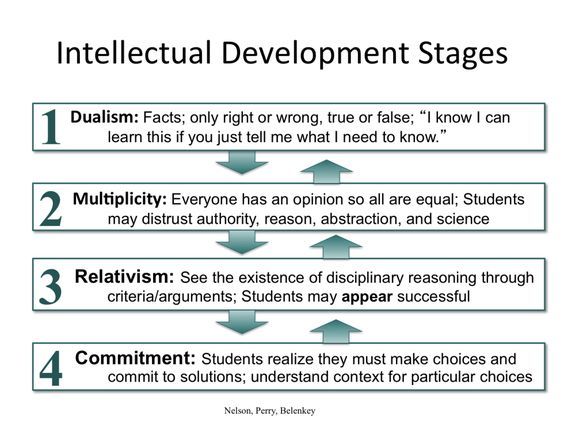 The book we’re reading is going a bit further, even, down this Rabbit Hole. Here’s a direct quote from chapter one, the chapter that sets the tone for the whole book:

“But once we acknowledge that our commitments are based on probability and not certainty, we will be much more open to the reasoning of those who are trying to persuade us to change our minds. After all we may well be wrong about some of our beliefs. We have to listen respectfully to those with whom we may disagree. They just may be right.” (emphasis mine)

In literally the next paragraph this enlightened author then says:

“There will seldom be a position on a social controversy about you will be able to say ‘this is clearly the right position on the issue.’ If such certainty were possible, reasonable people would not be debating the issue.” (Emphasis still mine.)

(If you want to see for yourself, the book is “Asking the Right Questions: A guide to critical thinking” by M. Neil Browne and Stuart M. Keeley.)

Yes, students, your opponent maybe be right, but there is no clearly right position for them to be right about…cause that makes sense, in this critical thinking book.

I pointed out to my professor the hypocrisy of someone stating that certainty is a dangerous state of mind with such certainty… She wasn’t amused.😐😐😑

She also said that there is no such thing as “Moral Objectivity”, to which I asked “Are you certain about that?” She looked at me for a split second like “so…we’re doing this” and then said “No, all things change.”

To do her justice, I do not think my professor is trying to indoctrinate us on purpose. She seems like a nice lady who didn’t even get too irritated at me for calling her out. But she’s still teaching irresponsibly if she does not acknowledge what are clear and oblivious hypocrisies in the philosophy of the people we’re reading.

And this book is full of it just in the first chapter, which she also does not acknowledge.

What’s disturbing about this book is that on the next page, it states that critical thinking can be humane and progressive, if it is not used as a weapon.

Critical thinking is a weapons, no matter how you use it, you are trying to clear certain fallacies and ideas out of your way to make room for the good stuff.

Also, no form of reasoning is inherently humane, Reason is Reason. It’s measuring, assessing, analyzing, it’s neither kind nor cruel.

One might reason that it is better to stick to the old thing than to a new thing. Reason is not inherently progressive. Whatever these guys even mean by that, they don’t specify.

All this tells me is that this is intentional.

It’s silly to pretend it could not be intentional.

Browne and Keeley are deliberately trying to shame students who they suspect hold different values from them into feeling stupid, and accepting their beliefs.

The student is told in a polite, concerned tone that we should listen to other beliefs, but this is not demonstrated, because they authors do not bother to consider the notion that there may actually be a higher truth, they just throw that out immediately. Therefore making an assumption that they do not test their own form of critical thinking on.

It’s condescending as heck, and it’s brainwashing. I normally hesitate to accuse people of doing this deliberately, but there’s just no way so many blatant instances could occur withing two pages, if it was not intentional.

That being said, the inconsistency within their own thinking is rather impressive, as within my professor’s, and the other articles we’ve been reading.

I know what it is, they are muddled, because that is easier.

If you treat truth as real, and clear, and teach people how to pursue it, you run into the uncomfortable fact that truth has to be true for a reason.  There has to be something behind it, or it would not be true. Like a prize on a show where you have to choose between different doors.

That Something behind Truth might just be something more powerful than us, something we might have to take into consideration when we make decisions.

What’s funny is that not everyone who rejects the idea of a Divine standard is living an immoral life, it’s simply that they don’t want to be controlled, even if being controlled would only mean they had to do the right thing, which they claim to care about.

Some people say they don’t need God to lead a moral life, they can just decided to themselves without some Great Power telling them what to do.

These people do not understand what God is, if they believe that they could even have an idea of what is right, without Him. What standard would they go by? What else could make sense bu that God put certain rules in place in the universe.

Personally, I do not find believing in God to be limiting. Believing in a God who has no limits means that I have far fewer limits than I would otherwise have. The person who does not believe in God thinks flying is impossible without technology, the person who believes in God only thinks flying is improbable, it is not impossible. (Some mystics were said to have floated.)

Believing in God allows me to see good in almost everything, even if I mostly disagree with it, and allows me to judge anything as having flaws, if it does. I do not have to pretend.

Those who believe God is truth can love truth, and love pursuing it, even if the path to it is through cold logic and not directly acknowledging God.

But those who believe truth is not certain cannot allow for anyone or anything that would make it certain, therefore they exclude any valid reasoning on a Christian’s part.

If it is not so, then why do they not include religious based arguments int hes classes, what are they do afraid of? If all views are equal, why is a religious view also not equal?

These are questions you won’t see addressed in college.
Until next time, stay honest–Natasha.
https://www.youtube.com/watch?v=eapTDC5es_4